Latest news twilight time yesterday: brown rats (mother & offspring) strolling around as if they own the place. This is no Jim Herbert fictional scenario. It's real. Saw them gutsing quite blatantly on the rodent bait in several plastic trays dotted along the path under the rose arch, which up until then I'd only suspected was a rat run.
Will be looking into painting the drainpipes with special rodent-catching glue and possibly acquiring a rat zapper. Stand by for further developments....
Posted by Grenville and 'brother' at 09:06 No comments:

And it all really did happen, including the neighbour with the recent heart surgery. He's since told me though that it's an aluminium valve not a pig's valve. Apparently they last a good five years longer.
Posted by Grenville and 'brother' at 05:05 No comments: 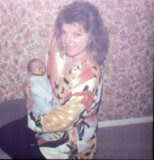